If you read my previous article, you know that I hitchhiked in Quintana Roo.
My plans changed somehow because I met this incredible couple and decided last-minute to travel with them to Chiapas instead of going to Belize. 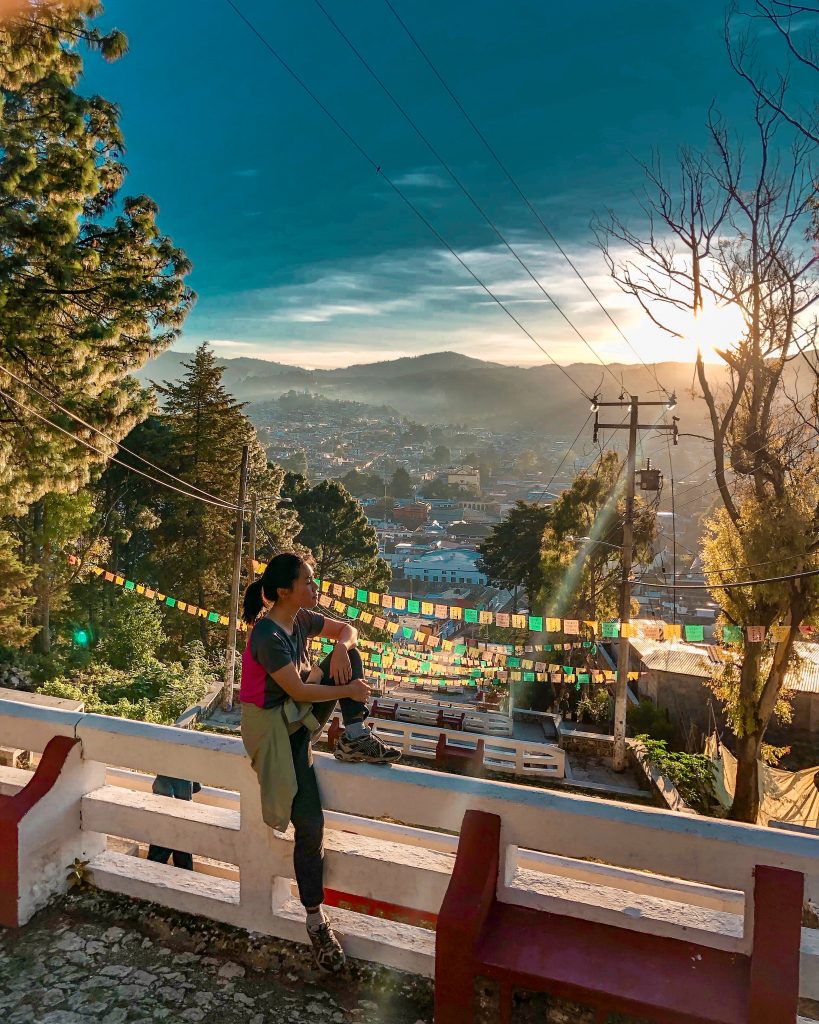 I am so grateful that I had this opportunity and jumped on it, because I not only had a great time with them, but I also got to know my favorite state of Mexico called Chiapas.

Palenque – Where Everything Started

From Quintana Roo to Chiapas, it will take you at least 12 hours to drive.
You will probably cross the states of Yucatan, Campeche and Tabasco before you arrive there.

Chiapas is full of cultural aspects, great food and beautiful places to visit.
Palenque was my first stop in Chiapas, a beautiful ancient Mayan city that flourished in the 7th century. It’s wonderful to see how the ancient peoples built on the landscape to claimed it as their own. But after their decline, nature took back what belonged to her and the city was absorbed back into the jungle of mahogany and sapodilla trees. And now, much later, it has been excavated and restored once again.

We got a young tour guide in Palenque, or rather I should say we hired him.

He was maybe only 10 years old. And he told me with his timid yet bubbly personality that he works after school and weekend to help his family. His English was moderate, but good enough to communicate.

I’m totally in love with ruins and everything that is ancient, for this reason I was so delighted to see that there wasn’t a big crowd of tourists there.
BUT it was a hell of a humid day, you walk for 10 minutes bathed in your own sweat. But the sweat and the effort was totally worth it.
Therefore, I highly recommend you to go to Palenque.

The Surroundings of Palenque

There is more to do in this area than see the ancient Mayan ruins. On the same day, we visited the beautiful Cascada de Misol-Ha, which is located in the Municipality of Salto de Agua, 20 kilometers from Palenque. This waterfall consists of one single cascade of 35m and a long walking trail behind it.

Further away, about 70 kilometers from Palenque, you might drop by at the Cascadas de Agua Azul. They are a series of waterfalls found on the Xanil River.
“Agua Azul” means “Blue Water”, and you’ll see that these waterfalls live up to their name when it is not rainy season. Unfortunately, I came during rainy season and it was not very blue.

One of the things that I spent a lot of time reflecting on that day were the poor kids who tried to sell me their food.

The food they sold was not more than 0.20 USD. It was pretty depressing to me. It looked like their whole life would depend on tourists like me. I have not experienced poverty and distress this severe since Cambodia.
And I had to think about it for days afterwards. But those are the moments in life when you realize how good you are in life and how much you should value what you have.

So far, San Cristóbal de las Casas is my favorite city. I am currently writing in a cafe shop in Villahermosa, Tabasco. My two last destinations in Mexico were Oaxaca and Guadalajara. So it might change, but I think this city has performed a magic on me that is hard to beat.

In short: San Cristóbal de las Casas is a highland town in the southern Mexican state of Chiapas. It is known for its well-preserved colonial architecture, colorful paintings, weavings and other handicrafts.

I fell in love with the city in the first seconds. Finally after almost 2 months I could finally escape the sweltering heat and hot weather. The temperatures were perfect in San Cristobal. Cool and pleasant with sunshine during the day and a dry, cool air at night. Moreover, the culture, the friendly people, the colonial cobble streets, the architecture – just everything in my eyes was heavenly.

My first serious thought after my first day: I could really stay in this city for a few weeks.
Usually, every morning I would wake up at 6 am to go jogging. The rest of the day you’d find me wandering around the city as usual. The smells, the food and the colorful vibes make the city a very special place to me.

Another bonus is that the city is surrounded by mountains, hence you can do a lot of hiking activities. Perfect for someone like me who loves sports and can pump out some energy. If I only had one choice where to return in Mexico, it would probably be here.

My last stop in Chiapas was Tapachula, where I would cross the border to Guatemala. After only 3 days, we left San Cristobal and stopped on the way at Lagunas de Montebello National Park. There, we visited some beautiful lakes with none of the other tourists. As you might have found out about me, I don’t much like overcrowded places.

One of the most ridiculous things I saw was the border between Guatemala and Mexico. At one section, it divided a lake in 2, which was only separated by a simple line hanging over the water.
In my opinion, borders only exist in people’s minds. Nothing more. We are all born on the same planet. It’s true that we grow up with different values and in different cultural systems. But one of my biggest wishes is that one day we won’t have any prejudices and we’d all be more open-minded towards other cultures and other peoples.

Before we arrived in Tapachula, we stopped in this small city called Motozintla.

If you really want to experience genuine and non-touristy places and you have a car to visit remote places, go to Motozintla.

Tapachula – The Border to Guatemala

I still reminisce when I crossed the border from Brazil to Paraguay. How crazy it was back then in Ciudad del Este, Paraguay. The same goes for Tapachula, a very cultural and noisy place where sketchy businesses run, that I do not want to know anything about, to be honest. I really do not want to be political in my blog, but it was a shock to me. I’m talking about the Hondurans who crossed the border into Mexico to flee to the US. This is the moment when I have the incredible world events right in front of my eyes and feel so weak and helpless. These people flee from the bad economic conditions in Honduras and hope for a better future, but are then forced back to the border with violence. Most of them are innocent women and children.

I do not want to imagine what will happen at the US border under Trump’s government. I am not going to refer deeply to it at the moment.
But we definitely should not ignore what’s happening around us and always be aware of how blessed we are.

After all the rollercoaster of the emotions, I said goodbye to my beloved Rita and Fredy, who had taken care of me as if I was their own daughter. Then I went to a country that is probably now one of my top 10 favorite countries – an incredibly wonderful country called Guatemala.