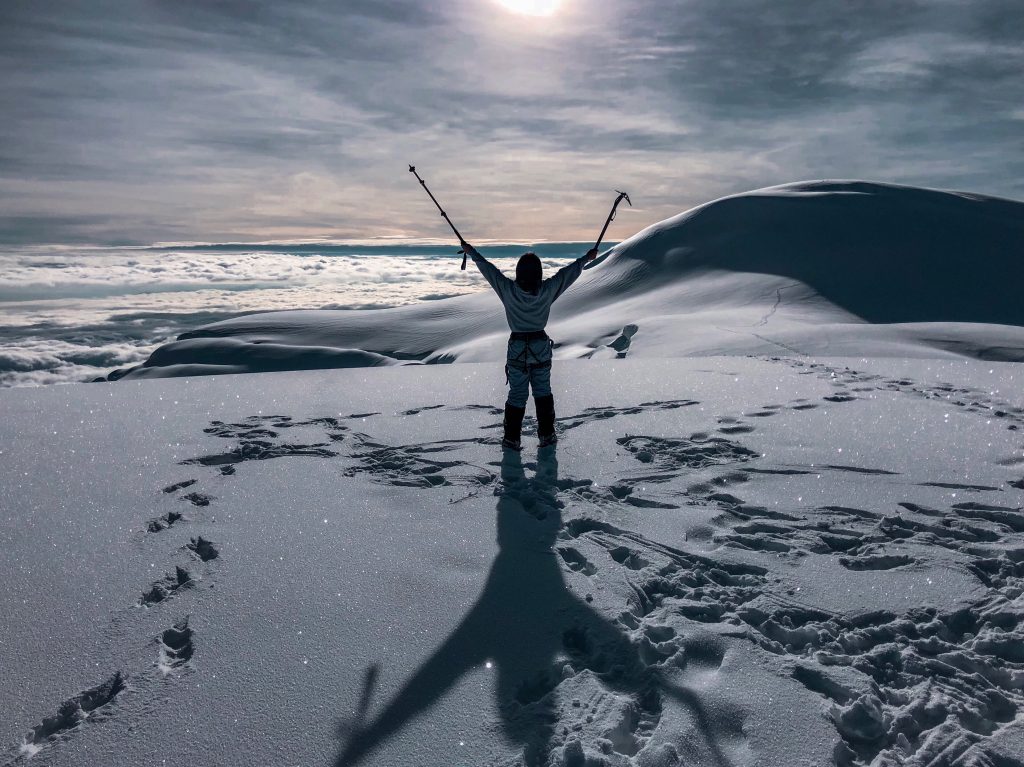 I wanted to trek Chimborazo to complete a new summit record for myself. AND the Chimborazo Volcano is the closest point to the sun and outer space. Its location near the equator (the widest section of the planet, since the shape of the planet bulges towards the middle) combined with its elevation (6,268m or 20.564ft) make it the furthest point from the center of the Earth.

It has a mixed ice and rock terrain. And actually it is only recommended for climbers with previous experience in the use of crampons and ice-axes.

Nevertheless, I was afraid I wouldn’t make it because I couldn’t acclimatize myself before the trek. After Salkantay and Machu Picchu I was in Amazonia, Lima, and a few cities in Ecuador. There was no time for acclimatization. Not even a little bit. And the last thing I wanted was to suffer from altitude sickness.

I was a little bit nervous the day I started. The night before, I searched for a guide in Baños for hours to climb Chimborazo.  Even though it is the highest peak in Ecuador and the world, it is not trekked by many people and tourists. I had difficulties in finding a guide, but at the end I was successful with Safe Destiny Baños.

My guide was Nato, a funny and very extraordinary man. We would stick together the next four days, two days in Chimborazo and two days in Cotopaxi.

First Day Of The Trek

We met up at the bus terminal in Baños and took the bus to the national park of Chimborazo. There was a truck there that picked us and his friends up and drove us to Refugio Carrel (4800m) where we stayed overnight. I tried my first hike by myself when we arrived in the afternoon to Refugio Whymper (5000m). I felt pretty fine and was surprised by my good health conditions at this point.

We ate dinner at 5pm and went to bed to wake up around 10pm to get ready for the trek.

I didn’t get any sleep at all. Nada. Niente. Besides Nato and I, there was another group of 3 people. A German guy, his friend and their guide. It is mandatory to trek Chimborazo with a guide and usually they don’t take more than 2 or 3 people per group. You will get all the mountaineering gear like carabiners, ice axes, crampons, rope, helmet, headlamp etc.

When I woke up, the German guy was already doing 20 push-ups. My thoughts were: ‘This guy is so fit, he is going to beat me right from the first second’. I told him to surpassed me and we would see each other on the summit. With no sleep I also couldn’t eat at 10pm. I was not hungry, but nervous about the trek. Putting on all my layers and gear, we started to hike up. Just with the moonlight.

Surprisingly, I was very fast and for the first 3 hours I felt just incredibly great. The other group was way behind us and at a certain point, I couldn’t even see them anymore.

Second Day Of The Trek

After midnight, I started to feel weak and the mountaineering boots which Nato gave to me started to tie up my ankles. It was so tight it hurt my ankles tremendously and I found it difficult to hike the stiff icy terrain. I got slow and it felt like a nightmare started. I was very afraid I wouldn’t make it to the top, because I’ve never started a mountain without getting to the summit.

And for me, there is only one option: summit or nothing at all. But when your will is strong, you can achieve anything. The last 30 minutes were so painful. Not only my ankles and feet hurt. But I was also completely out of energy and the sleep deprivation was devastating to my mind and body.

Still, I didn’t think about giving up. Nato was very worried about the time. We should have reached the summit before sunrise, but we didn’t make it before. It is very dangerous to descend Chimborazo when the sun is out because you never know when it can create major cracks in the ice.

The last half hour was painful and I was working against my body. I fell many times into the snow and even fell asleep for a few seconds. I got to know this is actually very dangerous. Gladly, Nato always pulled me up and motivated me to go further. My mind still didn’t give up and urged me to get my shit together and hike further up the endless last part of God’s beautiful Icy Throne.

The Summit Or The Icy Throne Of God

For me, the summit of Chimborazo is like conquering the icy throne of God. I swear it is the first time I ever cried on a summit of a mountain/volcano. I burst into tears when I realized I really made it to the summit. At the same time, I had this divine feeling of being unstoppable.

There is nothing in this world I can’t do and I will reach every goal I set in my life. It was a feeling I’ve never had in life before. The feeling of being immortal. I know it might sound a bit vain for some of you, but I’m just describing to you what I experienced. What’s next? – watch out Mount Everest! (God damn it, because it’s so expensive to climb Mount Everest!)

On the way back, I think I man-made the longest slide on Earth. It took me only one and a half hours to get back to Refugio Carrel. I was literally sliding 80% of the way back. In the refugio, I asked the guy why they couldn’t reach the summit. He said both of them experienced severe altitude sickness and had to return halfway to the summit. I am thankful for my own body getting me there. And for the first time in the last 4 years of traveling – I was really very proud of myself.

I paid 320 US-Dollars for this experience. And let me tell you it was worth every penny for me and I would do it again every time.