As you know from my hitchhiking trip through Patagonia, the way from El Calafate to El Chalten was too difficult to catch a ride.
We talked to other travelers and they had the same dilemma when they tried to hitchhike this route.
Truly we had immense struggles to catch a ride to El Chalten and on top of that by the end of the day, 5 of us hitchhikers wanted to go to El Chalten. And finally nobody of us got a ride. That’s called life I guess.
But you can read more about it in my hitchhiking blog post. 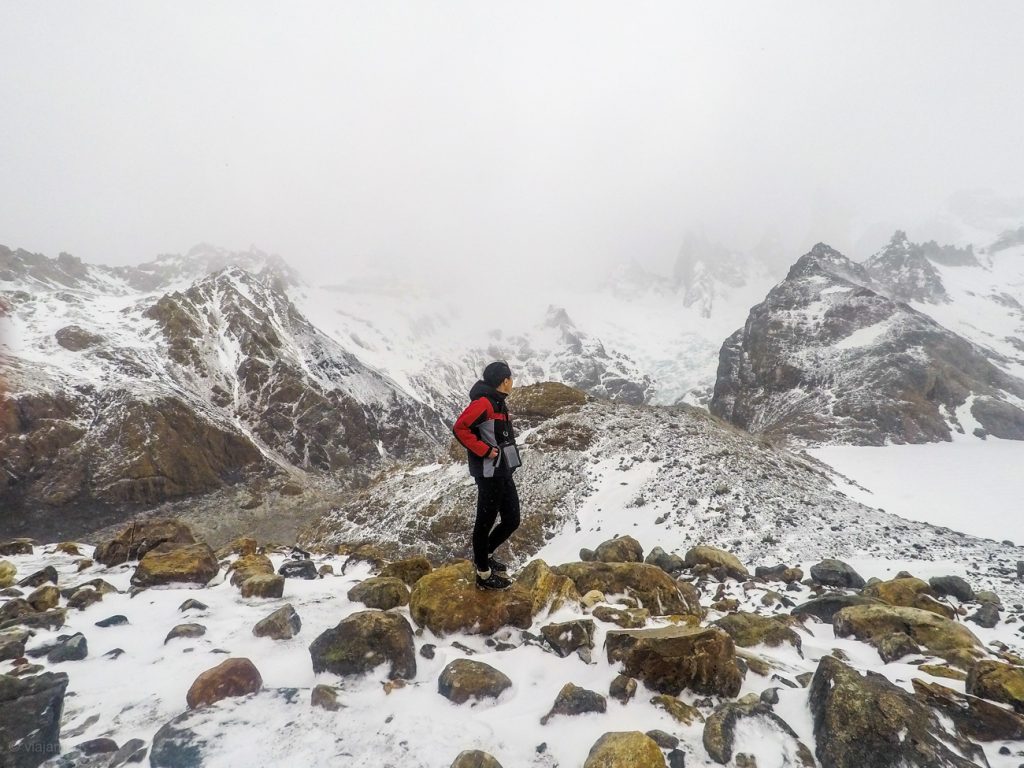 A Village With The Name El Chalten

As we have met Toni and his family in El Calafate, they offered us a free stay in El Chalten in their hospederia, close to the city center.
But don’t get me wrong, it’s not that difficult to be close to the center in such a petite town like El Chalten.
Oh I forget it’s even not a town, it is “just” a mountain village in Santa Cruz Province of Argentina.

The village is located within the Glaciares National Park at the base of Cerro Torre and the Fitz Roy mountains, therefore the rules of the national park have to be applied to the village. Due to the numerous mountains around the village, El Chalten became a mekka for outdoor-lovers and those who are passionate about climbing.
El Chalten was founded more than 30 years ago and is nowadays used as a base for the numerous trails to the surrounding peaks and glacial lakes of the national park. Therefore, El Chalten is also called as Argentinia’s Trekking Capital.

The word “Chalten” is a tehuelche word which means smoking mountain. The peaks are most of the time covered by clouds and can be easily confounded as a volcano or smoking mountains. I don’t know if it made sense what I wrote, but I hope you understand what I mean?

The two ATMs in the village are often out of money, accordingly if you don’t like the feeling of being grounded, bring mounds of money with you. There are plenty of hostels, bakeries, restaurants and shops spawned by tourism. El Chalten is literally living from tourism, on off-seasons more deserted than brisk though.

The Disadvantage and Lovely People

One reason why I could never live for more than a month in El Chalten is the weather. The weather is unpredictable.
The day can start with sunshine and could end up in a squall and sweep you away. Just kidding, if you aren’t feather-light, nothing will happen to you.

I promise, although I warned you. The wind in El Chalten feels like somebody is whipping you directly in your face.
Windswept like El Chalten is no other city I have ever been to. Who needs to walk when the friggin’ wind can carry you around, right?
But wait until the smile certainly drained from your face when you get headwind. Believe me, at this point I rather wished myself to be in a desert than to have to struggle against the wind.

However, if you want to do some serious treks and hikes, two weeks in El Chalten is the right minimum of stay.
Afterwards you will leave the capital of trekking with the feeling of a champion.
I only stayed 4 days. The last day I blogged, took a rest and got myself ready for the supreme trek discipline with the notorious name of Torres del Paine.

In El Chalten we met two lovely people on our way to the end of the world: Wilhelmina and her daughter Frida. Both incredibly lovely people who shared great chats during the nights with us. Thank you so much for everything!
Even though I know you don’t have internet and might never read this blog post of mine.

After Bariloche and numerous hikes and treks I was fitter than most of the people on this trail. We started the trail at 4 pm on a very cloudy and windy day. Did I already mention, that it could be sometimes a little bit windy in El Chalten?

Seriously, if you are as fit as a fiddle this trek seems to be like taking a walk with your dog in a park.
We started late but arrived at Leguna Torre after 2 1/2 hours.
90 minutes earlier than the expected time of the tourist information center. Getting close to the laguna you have to be very careful with the strong wind. I felt somehow I landed on Mars according to the landscape.

And on the other side the wind whipped my face, stronger than in the village. So please walk carefully.
The trek was fun, but my favourite one in Chalten is Laguna de Los Tres.

The trek is 10 km/ 6,2 miles and last for 4 hours for one way. We did the trek in 3 1/2 hours with several short breaks. Impeded by the thick snowfall on our way up, I competed with a yeti covered by the amount of snow in my face and on my clothes.

The first 9 km reminds me of Laguna Torre, not too bad. But the last 1 km you will need one hour if the weather is not in the best conditions.
It’s going super steep all the way up and feels like a never-ending stairways to heaven. Here, too – Be careful!
There was a sign, that you shouldn’t hike by snowfall, wind or ice. Lucky like we are, the weather conspired against us.
Ta-da!, see here we had snowfall, wind and ice on our way up.
In October Laguna de Los Tres is frozen and covered by snow.

The Feeling of Happiness

But the feeling of arriving to the top of a mountain is an explosion of endorphin in body and mind.
When your life is like an adventure you always wanted to live, everyday will be a new adventure.
And when you want something, it feels like the whole universe conspires in helping you to reach your goals. Just go and reach for it.
No miracles start only by sitting everyday on the couch.
And at this point in my life, I believe everyone deserves the feeling of happiness and love I received after climbing to the top of those mountains.

If you read this, I want to tell you that your life means your decisions and you totally deserve it to be happy.
Like everyone else. Make one person per day happy with your positivity. Sometimes you don’t need to travel to the end of the world like I do.
But do a small thing everyday to make yourself happy.
How can you help other people, if you can’t help yourself, right?
Start with yourself, if you can.

Okay, after two weeks in Bariloche and spending my time literally almost everyday in the Parque Nacional Nahuel Huapi. We showed little enthusiasm for this Lago.
If you have never been to Bariloche, it will be a great pleasure for you to visit Lago del Desierto and doing the trek around the lake of 12 kms and 5 hours. But paying 450 Argentine Pesos (25$) just to get to this lake and coming back wasn’t worth our money.

At the end, we still tried to enjoy the view, the trek and did the best out of our situation. But I wouldn’t do it again.
Don’t get me wrong, if it’s your first time seeing a lake in Patagonia you should go. But if you have visited several lakes and Bariloche before, you can save your money for chocolate or alfajores rather than spending the money on the visit of this Lago.

Lago del Desierto is about 37km/ 23 miles far away from El Chalten. But the conditions of the roads are more or less so bad that it takes 2 hours to get there from El Chalten with the car.
There is also an option to take a ferry to Chile and going further to Villa O’Higgins. The final stop of the legendary route of Carretera Austral.

From El Chalten to Puerto Natales

El Chalten, the cold and breezy village is a must-visit place.
But I don’t need to visit it in October again.
In my opinion, I still prefer Bariloche over El Chalten.
Read in my article of hitchhiking through Patagonia how we got from El Chalten to Puerto Natales.
My heart is racing insanely just thinking about seeing Torres del Paine.
Famous as well as infamous since it has the reputation to be the most beautiful national park in South America.
Torres del Paine, how could I keep low expectations on you?

Tell me if you need more information about El Chalten. And if you have any recommendations for my next trip in South America, just let me know. Cheers and good travels to everyone!