My Itinerary In Morocco 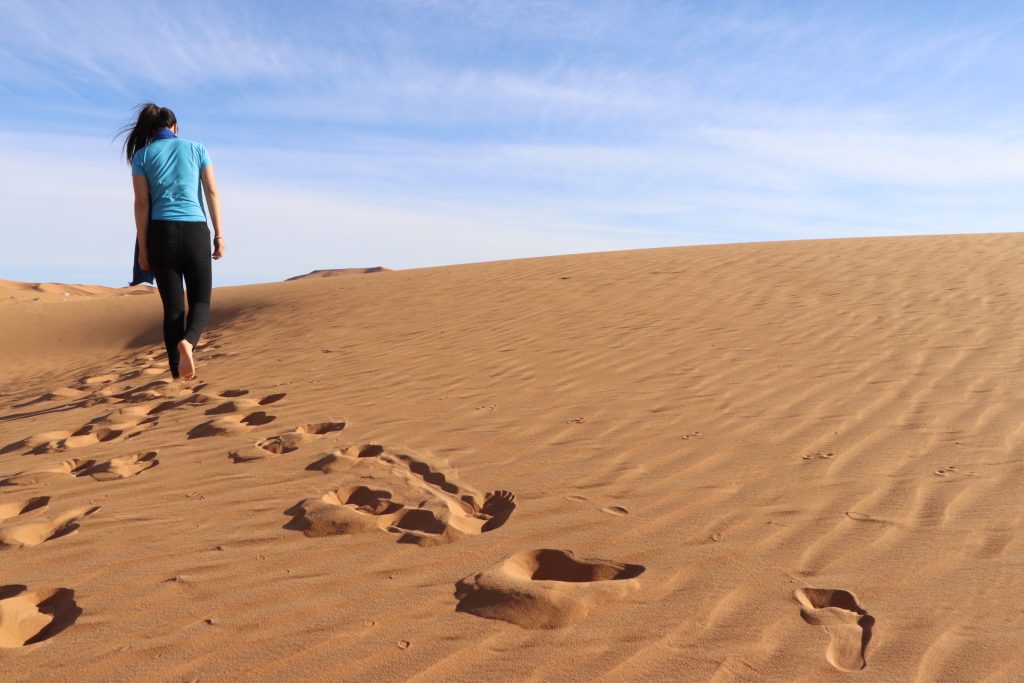 I didn’t have any plans when I traveled to Morocco, except I would land in Marrakech. The first two things I am usually doing is getting myself a sim-card with internet and getting some money at the ATM. In every country.
Apropos bank, some of them are charging withdrawal fees.
The bank which didn’t charge me any fee was Attijariwafa Bank.

I usually plan the first few nights of accommodation of my trip, and then I figure out the rest later. But most of the time I read some blogs about the country I want to visit, just to note some places which are in my personal interest.

Now I want to present you my perfect Moroccan itinerary. Funnily enough, I am quite proud of it. Literally everything fell into place perfectly! And I think I saw the cities in quite a good order somehow. If this itinerary works for you, it would be perfect!

You have to bargain hard in Marrakech. Bargain hard or go home.
Marrakech is the capital for tourism in Morocco, obviously it’s crowded, dirty and noisy. It is a place where I felt ripped off many times.
But compared to India still an easy city to travel. I guess India made me quite tough.
In Marrakech I stayed with my friend Hassan and his family. I am still so grateful that I have met such a nice person on my trip and his generous family treated me like a princess. Thank you so much for everything!

Everything is so relative, I don’t contemplate the old medina of Marrakech as appealing as the other cities. The vendors were quoting higher than Fes or Casablanca. It was not my favourite city, but a good city to start with. 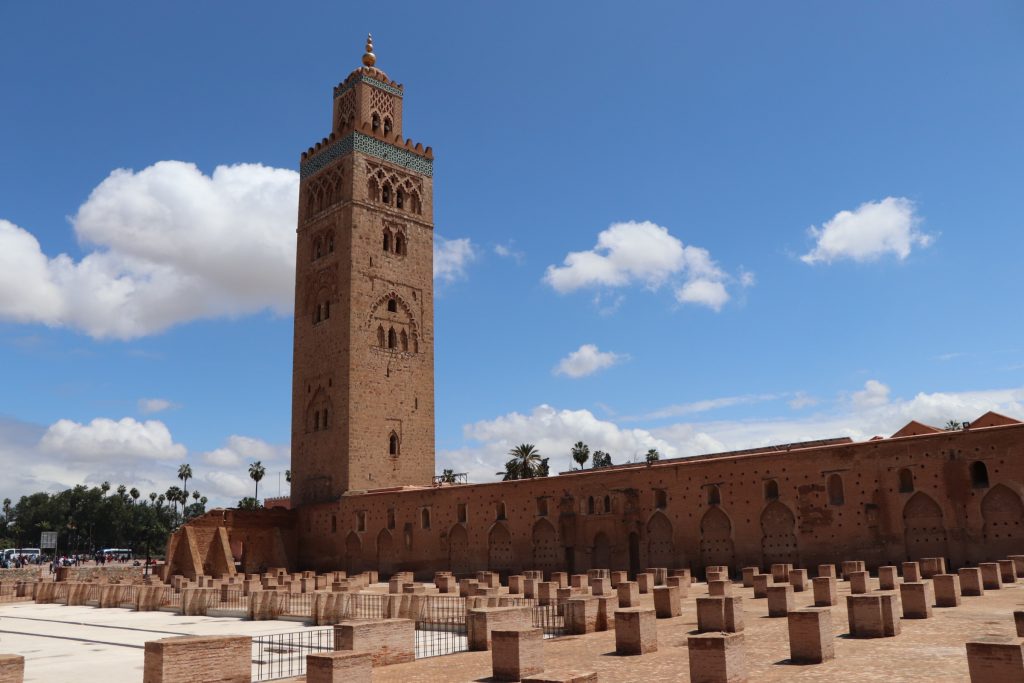 I rented a car and drove to Merzouga to visit the biggest desert on Earth – the stunning Sahara Desert! Renting a car cost 20€ per day in Morocco, you also need to add the cost of fuel. In 6 days I spent 500 Moroccan Dirhams for fuel, which equals 55 US-Dollars.

First day I stopped in Aït Benhaddou which has been a Unesco World Heritage since 1987 and is a great example of clay architecture.
On the way I also visited Quarzazate, which is “the Hollywood of Africa”. There are many film studios with expensive entrance fees. Not sure if it’s worth the money though. The view of the Atlas Mountains are breath-taking and it’s worth for a road trip and visit.

Third day, feeling like trapped on a desert island I had an overnight stay in Alnif. Also on this day  I paid a visit to  Todgha Gorges, a series of limestone river canyons. Close to the city Tinghir.

Finally in Merzouga I stayed at guest house, L’Auberge Petit Prince, who also organized my desert camping tour. At 5 pm I headed out on a 4×4 into the Sahara Desert!

The Sahara Desert will amazed you in every way!! It’s ridiculously beautiful and I feel so lucky to have visited such an incredible place on Earth.
If you have a kind of bucket list, write it down. 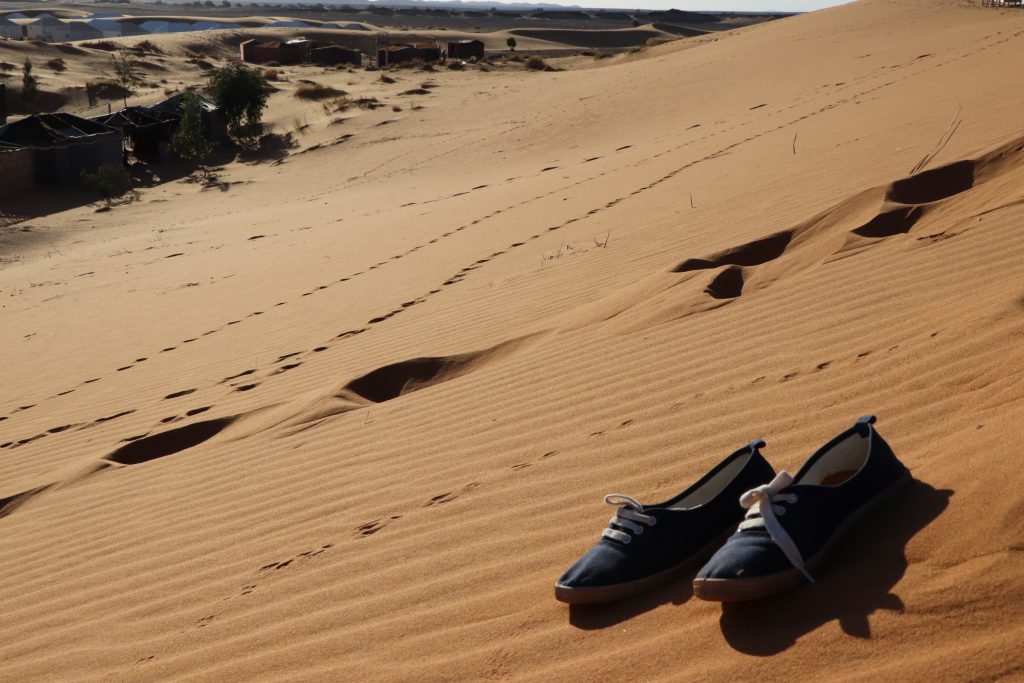 I prefer Fes over Marrakech. The old Medina is bigger and the city was calmer and more beautiful in my opinion. My personal highlight are the tanneries of the city. Maybe the most iconic smell of the city, too. At those tanneries they produce world-class leather with methods that have changed little since Middle Ages.

You can take a bus from Marrakech to Fes for 160 Moroccan Dirhams.

Not many people are visiting Meknes when they are in a rush, but I highly recommend you to visit the 6th largest city of Morocco.

Meknes was actually once the capital city under the reign of Sultan Moulay Ismaïl (1672–1727). He turned Meknes into an impressive city in a Spanish-Moorish style. Until today you can still evident the fusion of Islamic and European styles in the city.

I do love hitchhiking. I always do it in Taiwan and my last bigger trip was through Patagonia. And I promised to myself I will do hitchhiking on every continent. So there we go, I hitchhiked from Fes to Chefchaouen. And as crazy as I am, I even hitchhiked through the night. I started at 7 pm in Meknes and arrived around 1 am in Chefchaouen. It was not difficult, but due to the language barrier I was quite saddened not to be able to communicate with my drivers. I felt safe and one driver even spoke fluent Spanish with me. Thanks to my 9 months trip in South America, it helped me to survive in the North of Morocco. In the north some actually do speak Spanish.

Chefchaouen, nicknamed the “blue pearl of Morocco” is quite popular amongst tourists. There are a lot of theories why the city is blue, but nobody knows the exact reason. Anyway I love this city! Not only the city is painted in my favourite colour. But I love how calm and relaxed this city is.
The best way to explore the city is wandering around aimlessly and take in the beauty of this blue city.

I hitchhiked the whole day to Rabat. I stopped in Kenitra for 2 hours. Kenitra is quite a modern city, as well as Rabat.

In Rabat I walked aimlessly through the city and visited the mausoleum of Mohammed V. Located on the opposite side of Hassan Tower. During sunset time I felt the whiff of warm air breeze in my hair while watching the beautiful spectacle of the day.

Casablanca isn’t much of a tourist destination in Morocco, except for the old Medina and of course the biggest Mosque in the Africa – Hassan II Mosque. But the food prices in Casablanca are the cheapest compared to all the places I have been to in Morocco.

I can only recommend you to eat Tagine in Casablanca. The most famous food in Morocco.
On my way to Sahara I made one Tagine with two other people, I will show you a picture below.

Essaouira was full of tourists when I visited it in April, more than all the other places. It’s a beautiful small village with a harbour and an old medina. Outside of Medina you have a beach for surfing and tanning or just for swimming.

It looks quite European to me once I left the old medina. Also it’s much quieter than the big cities – obviously it’s more of a small town.
Go there and see if you like it or not.

Agadir might be the favourite city of the Moroccans. Why? It is quite European with its beaches. No medina and quite expensive for my relations. But worth a visit.

In my opinion you should visit Morocco when it’s not the summer’s peak.
I came in April and it was perfect weather. I also have to admit that I only met extremely different people in Morocco. Most of them were whether extremely friendly and helpful or extremely mean and aggressive to me.
Another confession is that I am not fond of the Arabic language.
It always sounds pretty intimidating to me, even though they might have only said ‘hi’ to each other.
But it is an interesting country with a beautiful culture.
It might not be an easy country to travel solo as a female traveler.
I really hope this itinerary might help some of you to organize your trip to Morocco.

One thought on “My Wonderful Weeks In Beautiful Morocco With Itinerary”