Sao Paulo people are as diverse as the world itself.
My first lesson I have learned in this city: Everyone could be Brazilian.
Whether you are black, white or asian-looking, everyone will find their place in Sao Paulo. The feminism and LGBT movement is simmering like in no other city I have been before. Besides from being a metropolis Sao Paulo is the place for work, parties and express one’s inviduality. Sao Paulo is dirty. Sao Paulo is funky.  Sao Paulo is very extraordinary. 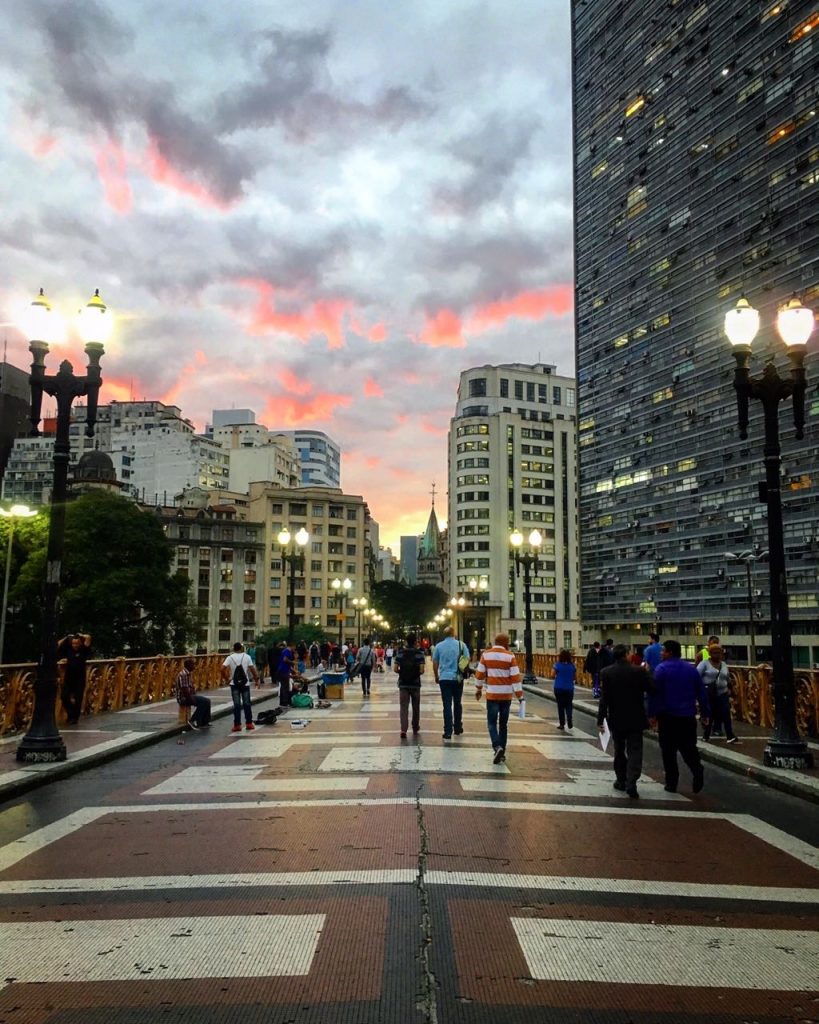 Brazilian people are open, helpful and liberal.
I guess it became usual for me if I can’t figure out if the person on my neighbour table is a girl or a boy. He or she would look like a girl but on the other side the strong growth of beard baffled me. So what?!
The moment you fooled yourself to have seen all weirdness in Sao Paulo, within seconds you got to see a black girl kissing intensely another punk girl, but again you are not certain if this punk girl is a boy or a girl.
Sao Paulo is as frigging diverse as my alphabet soup I used to eat during lunchtime in my childhood. Trying to build a word out of the letters of my soup was kind of impossible for me.
Frankfurt, where I grew up is in no way comparable to the open-mindedness and LGBT movement in Sampa, although Frankfurt is very multi-cultural. Nevertheless, I just can’t imagine to live in this city.
It’s like in one of my favourite song lyrics: “Live in New York once but leave before it makes you hard”. I got the same vibes for Sao Paulo, it is great here but the working situation and the living standard is low despite working onself to death. The congestion can be hard and very time consuming during daytime.

The first week in Sao Paulo I explored the city before I would burst into working on my blog the second and third week of Sao Paulo. The hard working spirit affected me.

The city can boasts with graffiti and art work daubed on the walls everywhere you go. Beco do Batman is nowadays a very touristy area around Rua Gonçalo Afonso and Rua Medeiros de Albuquerque in Vila Madalena. Streets known for their colourful and witty graffiti.

New York has its Central Park and Sampa its Ibirapuera Park, a huge urban city park with museum and areas for skating, jogging, cycling or sun-bathing. 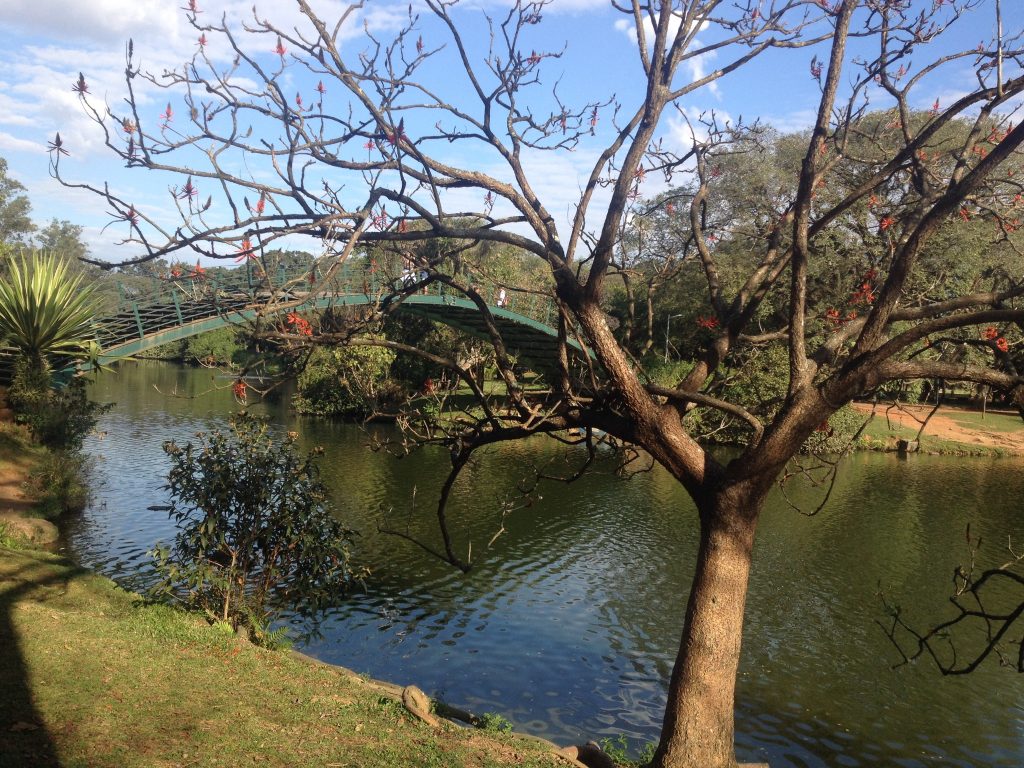 Only if you have a car you might pay a visit to the Buddhist temple “Templo Zu Lai”, 50 minutes drive away from Sao Paulo city center.
To escape the frantic city. And I mean a Buddhist temple in Brazil, why not?

Paulista Avenue is the most charming avenue in the city and Sunday is the best time to spend leisure in this area. The whole avenue is closed to cars and becomes a great recreational area for cyclists, skaters or runners on Sundays.
Besides walking you can also drop by the most famous tourist attractions like MASP or Trianon Park. If you decide to explore the sensations of Liberdade (Japanese district), consider the congested crowds.
Sampai is home to the largest Japanese diasphora in the whole world. Surprisingly, the banks in Liberdade are also in Japanese-style.

I joined one Free Walking Tour- Old Downtown and got to see everything of importance and the provided background information was just right.
Places you will pass by with your guide: Itália Building, Municipal Library, City Hall, República Square, Martinelli Building,
Chá Bridge, Anhangabaú Valley, Municipal Theatre,
Monastery of São Bento, Sé Cathedral, Stock Market area,
Banespa Building, Consolação Church, Copan Building and much more plus insider tips!
In my personal opinion I prefer the Pinacoteca museum over MASP.
The flaw: Pinacoteca is located in a shady area and walking to the museum made me feel uncomfortable and I wouldn’t be surprised if someone jumps out of a corner and provides me drugs or harasses me.

Augusta Street and Vila Madalena are popular nightlife districts.
Whereas I prefer hipster streets like Augusta Street.
By the abundance of nightclubs you are more confused than decisive.
So better make friends with locals and go out with them, but this is just my suggestion. At night I always took an Uber and to be honest I feel pretty unsafe at night in Sao Paulo as a girl with no defense techniques.

Before I arrived in Brazil I had no idea what to expect from the food.
And now I have to admit- not much. I am so sorry but Brazil’s food is good, but Asian food is much better for my taste.
Some people eating Feijoada everyday. One of the few dishes eaten everywhere in Brazil, heavy stew made out of black beans, sausages and pork. I am not a big fan of beans, therefore the vegetarian version of Feijoada won’t make it to my list of favourite foods.
But my first Pastel (a crust pie with some fillings) was love at first bite.
Especially with palmito (heart of palm) and it is the best Pastel you can eat.
The friend of Victoria- my host- made a crappy looking tapioca, but at least a tasty one.
Pamonha is a typical  traditional street food and is a paste made from sweet corn.
The Brazilian version of chocolate truffles is called Brigadeiro and very easy to prepare: The balls are made by simmering condensed milk with cocoa powder and shaped into balls.
My favourite Brazilian desert is Açaí, which is made of frozen and mashed açaí palm fruit and served as a smoothie in a bowl.
Pastel de nata, the egg tart pastry originally from Portugal can be also found in Brazil.

I didn’t try much yet, so I will give the food in Brazil another chance.
But my first impression of Brazilian food is not gushing.

Last but not least I want to say thank you to Victoria, my generous host who let me live with her for two weeks even without a single complaining.
Her party house with all her loca friends is legendary and thank you for inviting me to Wizard to meet all your lovely students!

Just by all the love and motives of Frida Kahlo in Sao Paulo, it is one more reason to love this crazy, huge, diverse and bustling metropolis.
“I paint self-portraits because I am so often alone, because I am the person I know best.” – Frida Kahlo
Feeling lonely and misunderstood might be also part of living in a big city like Sao Paulo, the other side of the coin.

One thought on “First Stop In Brazil: The Diversity Of Sao Paulo Is Invincible”